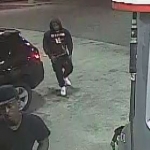 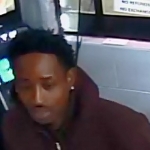 Fripp is currently being held at the Chatham County Detention Center on armed robbery, firearm possession and auto theft charges linked to a Dec. 29 incident on the 3300 block of Ogeechee Road.

UPDATE: Thursday, Savannah-Chatham Metropolitan Police investigators confirmed the identity of a suspect shown in surveillance images of two Dec. 2015 auto thefts. Theron Holmes, 29, was arrested in South Carolina by the Greenville County Sheriff’s Office on Jan. 15. At the time of his arrest, Holmes was in possession of a vehicle stolen on Dec. 30 from a business on the 5300 block of Bull Street in Savannah. SCMPD obtained warrants for  three counts theft by taking. Holmes is awaiting extradition to Savannah.

Investigators identified Holmes through a tip from a citizen.

Holmes is believed to have worked with at least one accomplice also shown in surveillance images. His accomplice is unidentified and remains at large.

Anyone with additional information on these cases should call CrimeStoppers at (912) 234-2020 or text CRIMES (274637) using the keyword CSTOP2020. Tipsters remain anonymous and may qualify for a cash reward.

One theft occurred just after 6 p.m. on Dec. 27 at a gas station on the 400 block of Martin Luther King, Jr. Boulevard. Two males arrived in a gold Chevrolet Impala that was recently reported stolen. The victim arrived in a black Jeep Compass. Both suspects exited the Chevrolet. One suspect distracted the victim as the second suspect stole the Jeep. The victim sustained a non-life-threatening injury while trying to stop the suspect. The vehicle was left running at the time of the theft.

Also, on Dec. 20,  at about 6:47 p.m. Metro responded to a convenience store on the 2100 block of Montgomery Street, after reports of a vehicle theft. Investigators believe the victim exited a blue 2006 Hyundai Sonata. Both suspects were sitting outside of the store in a silver four-door Pontiac sedan with a spoiler. One male suspect exited the Pontiac, before entering the Hyundai and driving away. The keys were left in the ignition of the stolen vehicle at the time of the theft. The stolen Hyundai was recovered with significant damage.

Investigators believe at least one of the suspects is involved in both incidents. That suspect is described as a black male in his 20s, with a dark complexion and his hair styled in twists. The suspect wears diamond stud earrings.  He stands roughly 5-8 to 5-10 and weighs about 150 pounds.

Anyone with information on these cases should call CrimeStoppers at (912) 234-2020 or text CRIMES (274637) using the keyword CSTOP2020. Tipsters remain anonymous and may qualify for a cash reward.