MAIT Responds to Accident with Injuries 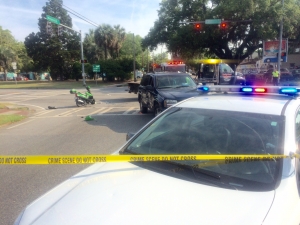 SAVANNAH, GA (May 12, 2016) – The Savannah-Chatham Metropolitan Police Department’s Major Accident Investigation Team responded to an accident with injuries at approximately 8:30 a.m., May 12, at the intersection of Victory Drive and Montgomery Street.

Tewana Brady, 39, was driving a Chevy Trailblazer west on Victory Drive and attempted to turn left onto Montgomery Street when she entered the path of Xavier Ponder, 27, who was driving a Taotao motor scooter eastbound on Victory.

Ponder struck Brady’s vehicle in the right, front door, and sustained serious injuries. She was transported to memorial University Medical Center for treatment.

As a precaution, Brady and the other occupant of her vehicle, a juvenile female, were also transported to Memorial where they were examined and released with no reported injuries.

The cause of this accident remains under investigation by MAIT.