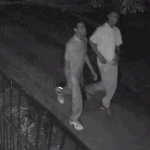 Have you seen these kids?

On Monday, Oct. 24, just after 8 p.m. two males attempted to rob a man and woman walking on Lincoln and East State streets. Minutes later, a woman was walking on East Bryan and Price streets when two males robbed her of her possessions. A weapon was used in both instances. No injuries were reported.

The subjects are described as black male juveniles, standing 5-5 to 5-7, with short haircuts and no facial hair. During the incidents one wore a white shirt and khaki pants. The second subject wore a black shirt, black pants and white sneakers.  Both fled the scenes on foot.