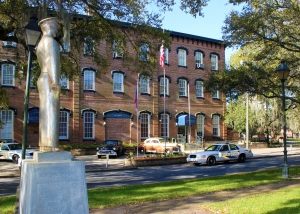 With its origins in the 1790’s, the Savannah Police Department has been protecting the Hostess City for over 200 years.

The colony of Georgia was established by the British to buffer its other colonies to the north from the Spanish in Florida. In 1733, General James Oglethorpe led an expedition which founded the City of Savannah on the bluffs overlooking the Savannah River, thirteen miles from the Atlantic Ocean.

By 1796, with Savannah growing, the city’s leadership saw the need for a system of patrols to protect the town. On June 20, 1796, a “guard and watch” was created with a staff of 28 men commanded by a Captain. This early force of peace-keepers did only night duty, going to work at twilight and serving until the “beat of reveille.” By January of 1812, officers were wearing distinctive brass-buttoned uniforms.

The Civil War in Savannah 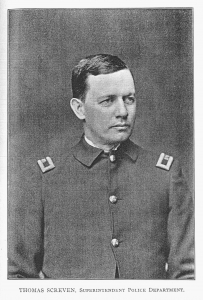 Savannah’s Guard and Watch grew steadily in the years prior to the Civil War. Records from 1852 list its strength as 86 men under the command of Captain of Police Francis M. Stone. The 1860 Annual Report listed the Department’s expenses for that year at $39,113.94; a police private in 1860 was paid $500 per year. With the outbreak of the Civil War, Yankees were believed a greater threat than criminals. The police were furnished with muskets and drilled as infantry in the town’s squares, much as their ancestors had done a century earlier.

In June 1854, the city passed an ordinance forming the Savannah Police Department. At that time, the officers were working directly under the mayor. This changed in 1865 when General Robert M. Anderson was appointed Chief of Police. A West Point graduate, General Anderson was stationed in the Washington Territory when Confederate troops fired on Ft. Sumter. He resigned his Union commission to accept a commission in the Confederate army. General Anderson saw action in a number of Civil War campaigns. On November 1st, 1865, General Anderson reorganized the Department creating a completely new force of 116 men. He served as the Department’s Chief until his death on February 8, 1888. The wall of our police barracks bears a plaque honoring the memory of General Anderson.

During the presidential election campaign of 1868, citizens opposed to Ulysses S. Grant clashed with scalawag elements. A riot broke out which resulted in the deaths of two police officers. Samuel Bryson and R. E. Read were the first Savannah Police Officers to be killed in the line of duty. The City purchased a burial plot in the Laurel Grove Cemetery for Officer Read, who had no family. Ironically, Officer Read’s was laid to rest in burial plot number 911 over a century before that number became synonymous with emergency services. Unfortunately, Ofc. Read’s grave was never properly marked. At a special ceremony on Police Memorial Day in May of 1999, the Department unveiled a newly placed marker at Ofc. Read’s gravesite. 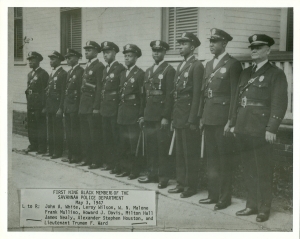 Birth of a New Department

Just after the turn of the century the burgeoning growth in the unincorporated areas of Chatham County began to feel the need for its own police department. On November 13, 1902, Fred W. Osborn pleaded before the Chatham County Commission to establish a County Police Force. Over the next ten years, the move toward creating the department grew until the state constitution was amended to allow counties to levy a tax to compensate (or pay) police officers. With the way now cleared, Chatham County formally began the organization process of what would become the Chatham County Police Department and in 1912 hired its first chief, A. P. McFarland.

Over the next century both departments continued their growth, implementing more scientific methods of investigation and law enforcement. After the horse and wagon, bicycles were the first true wheeled vehicles used by police. Interestingly, the officers that first rode bicycles were called “speeders.” As World War I was beginning in Europe, the first motorcycles were placed into service and as the war ended another modern improvement was brought to bear upon crime in the Coastal Empire, the automobile. However, horses, or “hay burners” remained the main mode of transportation for a number of years to come. Today, officers still employ their mounts as an effective visible deterrent to crime, allowing them a birds eye view above a crowd.

While the City of Savannah boasts hiring its first black officers in 1947, long before the civil rights upheaval of the 1960’s, Chatham County boasts the hiring of its first female police officer. Marie Bargeron was hired in 1924 by the CCPD “to arrest female suspects and detect places of ill repute.”

The Move Toward A Merger

In 1962, discussions began between the City and the County to consolidate the two police departments into one. These discussions continued over the next 40 years until in 2003 both the Chatham County Commission and the Savannah City Council voted to formally merge the departments. Commissioned with task of completing the merger within a year, the department set about bring the two into one which by any standard is a herculean effort. However, on January 1, 2005, the Savannah-Chatham Metropolitan Police Department stood as a fully merged, fully functional, singular police agency. 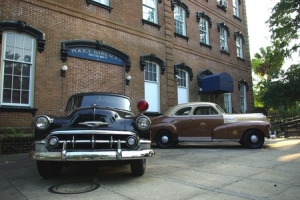 Prior to the merger the departments worked very closely. So closely in fact that they shared the same block on Habersham Street. The Savannah Police Barracks are still located on the north corner bordering Oglethorpe Street but the Chatham County Police Department also operated out of the old County Jail which stood mid-block before their move to Hodgson Memorial Drive in 1973.

Different Ways to Patrol a Beat … 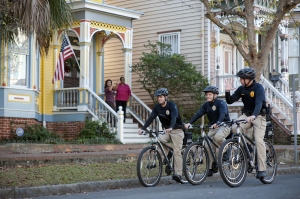 Over the past two centuries police in Savannah and Chatham County have patrolled the area in a number of different ways. At first the officers either walked their beats or rode horses. In fact, our history points out that the officers brought their own horses to ride their beats. Obviously, it wasn’t long before the city began to provide the officers with horses and later wagons. At the end of the 1800’s, a new mode of transportation made officer’s work a little easier… Bicycles! Interestingly, the officers that rode the bicycles in those days were referred to as “Speeders.” Shortly thereafter the department bought it’s first patrol cars and then motorcycles.

As the cars and motorcycles took over, the horses or “hayburners”, as they were called, were literally put out to pasture. Under Chief David Gellatly’s administration, the Horse or Mounted Patrol saw its re-introduction and today, they remain some of our most popular modes of patrols for neighborhoods, and shopping areas. Today, we use walking beats, patrol cars, bicycles, motorcycles and horses in strategic ways to best provide effective police patrols for the City of Savannah.