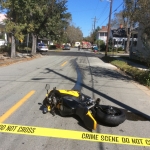 Garrett Michael Sherley, 21, was transported to Memorial University Medical Center after the 11:15 a.m. crash at Paulsen and East 39th streets.

He had been riding a 2008 Honda CBR motorcycle south on Paulsen at a high rate of speed when a 2001 Chevrolet Impala driven by a 24-year-old Savannah man crossed the intersection at 39th.

The motorcycle and its rider skidded through the intersection with the rider striking the rear quarter panel of the Chevrolet. The motorcycle came to a rest more than a block away.